It is every poultry farmer’s dream to see his or her broiler chickens growing gracefully and attaining the very much desire weight and height at the expected time. However, this fit is sometimes not always easy to achieve, or it might take more time than required. For example, a broiler chicken which is expected to reach 2.4kg live weight within 4 weeks of age will now take 7 weeks, and in such a situation the farmer is already running into a loss. 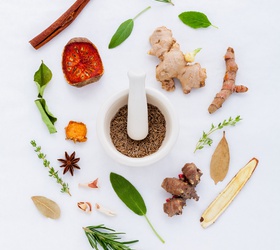 The reason for this slow growth in broiler might stem from many factors such as feed quality, chicken breed, health status, management, etc.

Among these factors, feed quality affects the growth of broiler chickens the most, and this has lead feed manufacturers into using feed supplements and additives for better growth and performance. These additives are commonly referred to as growth promoters or booster.

Also read: 6 smart tips to increase the body weight of your broiler chicken

These growth promoters are mainly antibiotics which are incorporated in feed formulation to boost and promote the growth and performance of chickens, however, their uses have shown many disadvantages like high cost, adverse side effect on the health of birds and long residue properties, antibiotic-resistant bacteria both in animal and man population.

Consequently, this development has lead to the ban of antibiotics use in feed by WHO and the European Union (EU) in 2006, and even by NAFDAC. Nevertheless, researchers are now seeking natural alternatives to these antibiotics, and there has been a lot of progress in this quest.

So, in this post, I am going to share with you 8 natural growth boosters for broiler that have been researched on and tested.

1. Garlic as a natural growth promoter for broiler 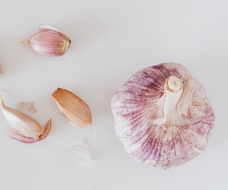 Garlic is rich in antimicrobial and inflammatory properties

Garlic ( Allium sativum) is one of the well-researched herbs that have been proven as an effective herbal medicine. Due to its antimicrobial properties, garlic has been tested as an alternative growth promoter for broiler chickens.

Horton and Prasad (1991) reported that garlic as a feed additive, improved broiler growth, feed conversion ratio (FCR), and decreased mortality rate. Garlic has been shown to increase the growth of important gut bacteria as probiotics. Also, Oloyede and Fasuyi have shown that garlic powder (GP), an inclusion rate of 3g/kg of broiler feed, result in higher growth performance.

Therefore, for a natural growth booster for broiler, you can incorporate 3g/kg garlic powder in your feed. For instance, for a 25kg bag of feed, you add 75g of garlic powder. You can instruct your local feed miller on what to do for a better result.

2. Cloves as a natural growth promoter for broiler

Cloves are the flower buds of the clove tree, an evergreen also known as Syzygium aromaticum.

Cloves are best known as a sweet and aromatic spice, but they have also been used in traditional medicine. Also, Its medicinal properties have been extended to improve growth in livestock, especially in boosting the growth of broiler chicken. Clove at doses of 100-200mg (0.1g-0.2g)/kg seem to improve feed efficiency (David et al, 2012)

For instance, for 25kg feed, you will add 2.5-5g clove essential oil

Also read: Poultry vaccination and schedule for Layers and Broilers

3. Turmeric as a natural growth promoter for broiler 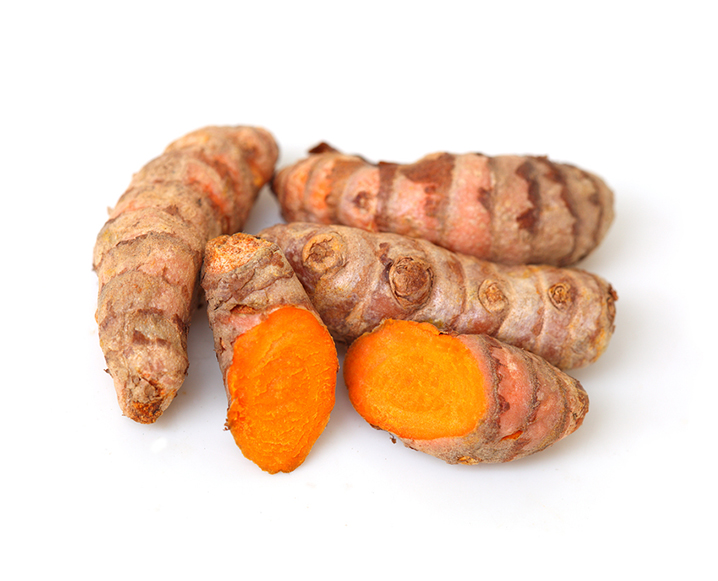 Turmeric reduces the risk of hyperlipidemia

Turmeric is also known as Curcuma longa of the ginger family, Zingiberaceae, the roof of which is used in cooking and in making Ayurvedic medicine. It has been shown to have antimicrobial, anti coccidiosis, and anti-inflammatory properties. It has also been shown to promote the growth performance of broiler chicken.

(Yesuf et al, 2017) concluded that turmeric at ( 1 to 2 g/kg in the total ration) for better and positive results on carcass yield  lean meat ( breast meat) production which could reduce the risk of hyperlipidemia and increase consumer acceptability.

This was also confirmed by ( Kafi et al, 2017) that supplementation of turmeric ( Curcuma longa ) improves the growth performance of broilers when added at the rate of 0.75% level as feed additives in broiler ration.

Also read: Blog post: 8 mistakes you must avoid if you want to succeed in poultry farming

4.  Black pepper as a natural growth promoter for broiler 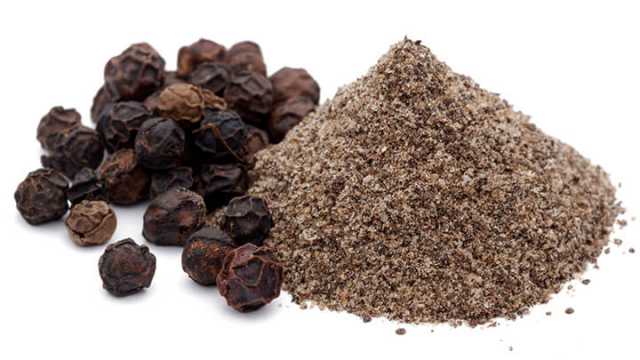 Rich in Vitamin B complex

Black pepper (Piper nigrum)- iyere in Yoruba, Uda in Hausa, and Uziza in Igbo. It is a flowering vine in the family Piperaceae, cultivated for its fruit, known as a peppercorn, which is usually dried and used as a spice and folk medicine. It has also been shown to have growth-promoting properties in broiler chicken.

5. Bitter Kola as a natural growth promoter for broiler Bitter kola (Garcinia kola) is another potential growth promoter in livestock, especially, in broiler chickens. It has been shown to have antimicrobial properties and a natural growth promoter that you can take advantage of by incorporating it into your feed formula for optimal growth.

Therefore, if you are adding bitter kola to your broiler feed, you are least sure that you have a good growth promoter and an antimicrobial agent in their feed.

To utilize Bitter Kola as a broiler growth promoter, sun-dry, and grind to a powder. Add 25g per 1Kg of feed

Also read: Blog post: 8 Beginner's guide in poultry farming in Nigeria you must follow, If you want to be successful

6. Ginger as a natural growth promoter for broiler 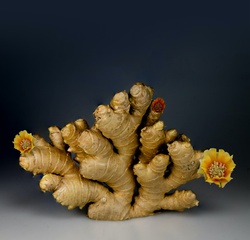 Ginger (Zingiber officinale) is another natural growth promoter used as an alternative to artificial antibiotics. Ginger may act as a pro-nutrient because of the vast active ingredients it has been reported to contain, such ingredients include carbohydrate, protein, lipid, minerals, and vitamins.

A protein-digesting enzyme (Zingibain)    found in ginger is believed to improve digestion as well as kill parasites and their eggs.

Herawati (2010) reported that Hubbard strain broilers fed 2% supplement red ginger in the diet had significantly higher final body weight than those on the control diet.

Also read:Layers vs. Broilers: Which One Should You Choose?

7. Cayenne Pepper as a natural growth promoter for broiler 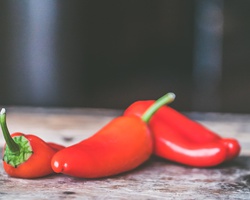 Cayenne pepper (Capsicum annuum ) is one of the phytobiotics with a high content of pharmacologically active ingredients. It was reported that adding cayenne pepper to the feed diet of chickens will increase and boost appetite and feed consumption or metabolism.

Cayenne pepper is also known to kill gut worms and it is effective for the treatment of coccidiosis. (Puvaca et al, 2015 ) observed that cayenne pepper powder at an inclusion rate of 0.5g/100g of broiler feed works great in boosting the bodyweight of broilers.

It has also shown the potency to replace broad-spectrum antibiotics known as Oxytetracycline (OTC), which is used in the treatment and prevention of diseases as well as improving digestibility in broiler chickens.

Also read:   How to Stop watery whitish, greenish, brownish-yellow and blood stain in your Chickens poops for full Recovery

8 Thyme as a natural growth promoter for broiler 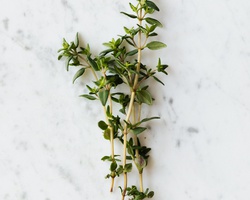 Thyme ( Thyme Vulgaris )is not only used as a spice but also useful as herbal medicine. Thymol and carvacrol are the major components of herbal oil, which form 20 -25% thyme extract, and showed considerable antimicrobial properties with no negative effects such as residue in animal meat and bacterial resistance.

It was demonstrated that thymol and carvacrol concentration from 100 to 1000ppm displayed a positive effect on broiler production (Hosseini et al, 2013).

(Youssef et al, 2016) concluded that thyme oil as 1.0g/kg diet may be used as a potential growth enhancer for broiler in the hot region during 1 – 28 days

Therefore, for every 25kg bag of feed production, you add 25g of thyme oil.

Note: If you are not using to formulating your feed, you can take it to your local feed miller and instruct him or her on what you want. He or She will be in a better position to mix the feedstuffs and additives for a better outcome.

This post is good. I wish to experiment it and compare to the synthetic medication. But you did not say when to administer these supplements. Do we just start mixing their feed with it from day one? Please give more insight. Thank you.

You mix it with their feed (from day one) during formulation based on the quantity I gave per Kg.

Thank you its helpful.,but incase we didn't find the oil can I use the powder instead

Do I just pick one or I can incorporate all of them with their feed?

Not that you cannot mix, but not all combinations will go well. It is better you take one at a time.

Can I mix it with there water?

You can, but for consistency it preferably you mix it with their feed. Moreover, some blend well with feed than in water. For instance, hot pepper will be unsafe for the birds, it can spill into their eyes.

Thanks for this but can we put this in their water as well?and can once use a mixture of these?

You can put it in water, but for consistency it is preferably you mix it with their feed. You can combine them but not all combination goes well.

Thank you for your discovery and dissemination of findings.

Sir, this is a great work done. Welldone. Please will this replace vaccination? And if not, what vaccines and at what time do we give the birds.
God bless.

Thanks Nduka. The organic supplements is not organic vaccines but an organic growth promoters.

Thanks for the update, it's highly enlightening. But how can I get clove essential oil and thyme oil?

Thanks for being there for us.
I am just breeding broiler for the first time I will be very happy if I can get schedule for there vaccine and have mixed the following ingredients : garlic, ginger,thyme, tumeric and cayenne pepper all is in powder form how do I go about it,they are 9 old today. thanks

It is my pleasure. If you get this, please email me. thanks.

it is my pleasure Maryam. email me on, chidisamuel222@gmail.com

Thank you, this is very informative and i will definitely try it

Weldone for the work done, sir, can I get a formula for broilers to grow fast?