As a child, observing the behavior of chickens has always fascinated me. Having them around the yard is soothing with natural vibes. But there is more than just being domestic birds and a great source of protein.

And as a poultry keeper, it will be helpful if you can naturally connect and understand the behavior of your poultry birds for a better farming experience.

So, in this post, I am going to share with you 40 facts about chickens that will leave you with a dropped jaw.

Also read: How to Stop watery whitish, greenish, brownish-yellow and blood stain in your Chickens poops for full Recovery 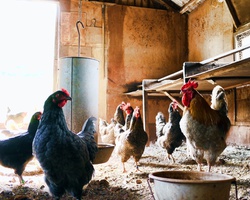 Photo by Brett Jordan from Pexel

2. Chickens can remember over 100 different faces of people or animals.

5.An egg develops at 31 degrees Celcius and laid at 41-degree Celcius.

6.Most eggs are typically laid in the morning between 7 am and 11 am.

7.As chickens grow older, they lay larger eggs, but fewer than when they’re younger.

Also read: 6 smart tips to increase the body weight of your broiler chicken

8.Chickens can taste saltiness like humans, but not sweetness

9.In Gainesville, Florida, eating chicken by any other method is illegal, you have to eat it with your bare.

10.A hen has to eat about two-kilo grams of feed to make one dozen eggs.

11. Hens generally choose their mates based on the size and brightness of a roosters comb on top of his head. Sometimes they will mate with multiple roosters at once

12.On average, 97 chickens are killed every 0.05 seconds worldwide.

13.Chicken egg's nutritional value is the same, regardless of the egg color. 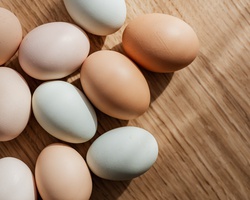 14. A rooster announces to a flock of chickens that he’s found food with a “took, took, took.” But the hens don’t pay attention if they already know that there is food around.

15. There’s a rare breed of chicken from Indonesia that is completely black including the feathers, beak, and organs, due to hyperpigmentation. They can be sold for $2,500.

The Unique black chickens from Indonesia

16 There’s a wild mushroom called a Laetiporus that tastes nearly the same as chicken. It is sometimes called the “fried chicken mushroom.”

18.The record for most egg yolks in one egg is 9 yolks.

20. Americans consume 8 billion chickens per year which are more chicken than beef; at 80 pounds of chicken per capita compared to 63 pounds of beef per capita.

Also read: 10 ways to sell and market your broiler chickens fast that are proven to work

21 Mother hens teach their chicks what to eat and what to avoid. 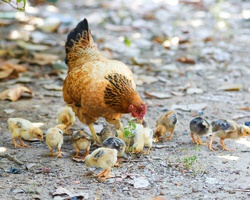 Photo by Quang from Pexel

22.When a chicken gets its head cut off, it can run the length of a football field before dropping dead.

23.The longest recorded flight by a chicken lasted for 13 seconds at a total distance of 301 feet

24.Nigeria consumes about 1.5 million tons of chicken annually but Nigeria produces only 30% of that. It is not that we cannot produce 100% of what we consume, it is just that 70% of the chickens that we consume are imported

25. The fear of chickens is called Alektorophobia

26. If the white of an egg is cloudy, it means the egg is fresh.

27. In order to attract hens, roosters will do a dance called “tidbitting” involving moving their head up and down, waddling, and making certain sounds.

28. When chickens feel stressed, they start to lose their feathers.

29.It only takes about 26 hours for a hen to produce an egg, and 21 days for the egg to incubate and hatch.

30.The longest recorded chicken to live was named Matilda, who lived to be 16 years old, which is over twice as long as an average chicken lifespan.

Also read:8 mistakes you must avoid if you want to succeed in poultry farming

31.Chickens have their unique language with over 30 different sounds used to communicate.

32.Baby chicks can develop object permanence as soon as 2 days old, while it takes human babies around 7 months.

33.Chickens are omnivores, and a hen will eat their raw eggs if they are not satisfied with their diet.

34.To clean themselves, chickens take dust baths. They dig a small pit in the ground and use the dirt to help with the oil in their feathers.

35. If chickens listen to classical music, they can lay bigger and heavier eggs.

36.Chickens can run up to 9 miles per hour

39.If you trick a hen into thinking a day is 28 hours by using certain lighting, she will lay bigger and stronger eggs.

There are currently no comments